Today was supposed to be pretty low-key, but all the walking is beginning to wear the boys out. We didn’t leave the apartment until noon, after what is becoming a regular routine of breakfast, Go Fish, and/or Othello. 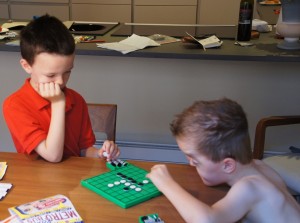 Then we went straight to lunch, and Max was complaining before we even got to the restaurant. We went to Roscioli, which I wouldn’t have even noticed if I didn’t have the address. It is tiny, with a great atmosphere, and I splurged on the burrata (so, so good), even though I knew no one would share it with me, and the gnocchi. The gnocchi in Italy are amazing, and I can’t understand why they are typically so terrible in the U.S. Here, they are soft, light, and pillowy, and at home they are usually heavy and a little chewy. Max has discovered the beauty of Carbonara, and I have refrained from telling him that the sauce is made from eggs for fear of him suddenly deciding he doesn’t like it. Carter is sticking with the Amatriciana, or something akin to it. He is the picky eater in the group, but has finished every bowl of pasta so far.

After lunch, we checked out Tiberina Island, which is a small island in the middle of the Tiber. I didn’t find it terribly interesting except that the bridge we crossed, Ponte Fabricio, is the oldest and only original bridge in Rome. It was built in 62 BC. Crazy.

We then headed toward La Bocca della Verita (Mouth of Truth), which the kids had read about in a book they have on Rome. Legend has it that if one tells a lie with his hand in its mouth, the hand will be bitten off. Max was too nervous to stick his hand in (I wonder why?), but Carter and I did, and thankfully we both still have all of our appendages. 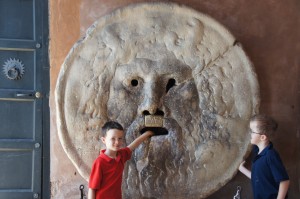 On our way back we got lost in Trastevere, in search of another recommended gelateria, Fior di Luna. We had chocolate, coconut, and lemon. The coconut was incredible, with tiny chewy bits of coconut. Now I need to try it at Teatro to compare.

In an effort to minimize complaining, we made a Fanta/wine stop, and then stopped at a Piazza for some fountain-playing and pigeon-chasing. 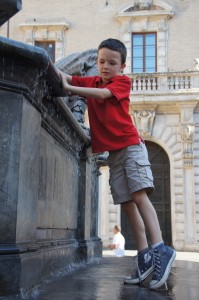 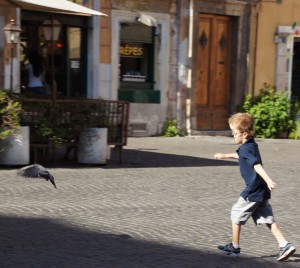 We finally made it home around 6 pm. I guess that is a lot of walking. We decided that tomorrow will be our “day of rest.” We’re going to have lunch nearby, watch movies on the iPad, and if they are well-behaved, we’ll go see the Trevi Fountain at night.