Monday morning we did our cage diving with the great whites. We didn’t get a ton of action when we were in the cage, but we did see one pass right in front of us, and it was quite large…about 20′ long. The boys got in the cage with us, but didn’t last long, since the water was about 58 degrees. Even with a 7 mm wetsuit, it was FREEZING in there! Jeffrey and I waited patiently, though, and were finally rewarded with a nice sighting. Unfortunately, the seas were very rough, so visibility was not great, and our time on the boat was a beating, despite having loaded up on Dramamine. There were times when I felt like I was in the movie The Perfect Storm, as some of the swells were 15-20 feet high. It was incredible to see the power of the ocean, and also incredible that only one of us lost his breakfast. We did see quite a few sharks, though when we were in the boat. Here’s a pic of one. 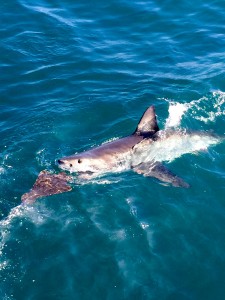 We stayed at a beautiful nature reserve near the coast of South Africa called Grootbos. The owner purchased the farm in 1991 and subsequently purchased neighboring farms to create a huge nature reserve with hundreds of species of flowers and birds. He built the first lodge in 1995, and has continued to add more accommodations since then. Sjome of the flowers on the reserve grow only on Grootbos land , and nowhere else in the entire world. This morning we went on a “flower safari” in an open land rover through the property and had a wonderful time. This is just one of the many flowers we saw on our trek, and they call it the pincushion. 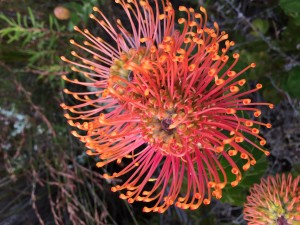 After lunch, we went quad biking (four wheeling) through the mountains and milk wood forest. There were some scary bits, and I was bringing up the rear. Carter, on the other hand, would slow down to create some distance between himself and Jeffrey, just so he could go as fast as he could to catch up. Jeffrey rode with Max, who did not pass his driving test, but they somehow managed to do a wheelie on a very steep,rocky incline, so it’s unclear if Max might have been better off by himself! Thankfully, we all managed to make it back without any injuries. 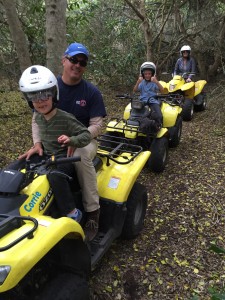 Afterward, we went to the sand dunes, which were absolutely breathtaking. The dunes are in the middle of the mountains…huge expanses of white that we could see from our hotel. Our guide, Gary, took us up in the Land Rover, and we found ourselves in a sea of sand as far as the eye could see. Jeffrey wanted to recreate some album cover he remembered (Asia, maybe?), so we all humored him. I must admit, it’s one of the best photos of the trip so far.

Afterward, our guide took us to the nearby beach, which can only be accessed by a 4×4 vehicle. As we drove down to the beach, we were overcome with the stunning sunset, and the smell of cold, fresh ocean. It is wintertime here, since we are south of the equator, and the temperature has been in the mid-fifties. We spent some time dipping our toes in the icy cold Atlantic, running through the soft sand, and reveling in the beauty of South Africa. A perfect ending to a glorious day. 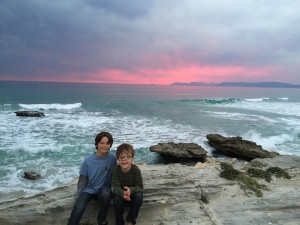