We’ve had a great couple days here to wrap up the end of our trip. Yesterday, we had lunch at Un’altra Storia, a restaurant that just opened a couple of days ago on our street. Jeffrey and I were walking by one day and said that we had never noticed that there was a restaurant there. As it turns out, we weren’t crazy….there had not been a restaurant there until Tuesday. So we decided to try it out, and it was delicious. Thursday is gnocchi day in Rome, and they made ours with a creamy tomato and bufala mozzarella. So, so good. As a side note, did you know that bufala mozzarella is made from the milk of the domestic water buffalo? And it is a different species from the wild water buffalo? Seriously.

Anyway, we had a pretty lazy afternoon shopping for another piece of luggage to carry home all of our loot, getting some of the worst caricatures of all time, and spending some time in an Irish pub for some cold Guiness. But back to the caricatures. It all started earlier this week when Jeffrey insisted I get a caricature in Piazza Navona. You can see that I only conceded when he sweet-talked a nearby restaurant into selling him a bottle of wine, and loaning us some wine glasses. Who would have thought that this one might be the best of the bunch! 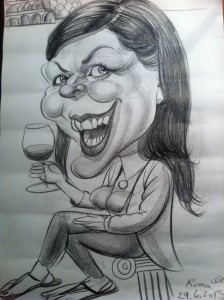 Carter wanted to get a real portrait, and after watching the artist do a pretty good one of someone else, we decided to give it a shot. It was amazing to watch the artist, and it is a beautiful portrait of someone, but barely resembles Carter. Maybe he’ll look like this in a few years? 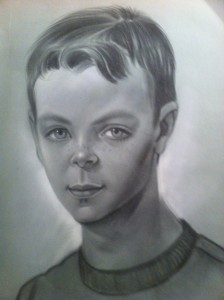 And finally, who is this random guy sitting next to Max? And when did Max turn into a vampire? 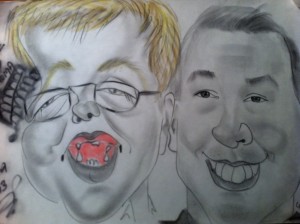 It’s not easy capturing the true image of someone, and these make me appreciate all of the incredible art we have seen over the past few weeks.

Later that evening, we had a night tour of the Colosseum, but first got caught in a rain storm and had to buy a beautiful, red 5 euro umbrella. It did make for a great “selfie” though, as we were huddled in a doorway trying to stay dry! 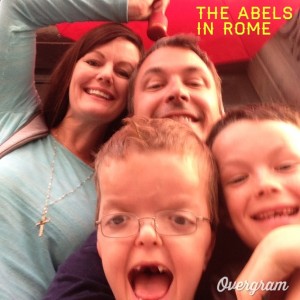 Thankfully, the rain stopped just in time for our tour, and we had a beautiful evening to visit the Colosseum without the heat or the crowds. Within the past few years, they have opened the underground areas to visitors. This is where the gladiators and the animals would wait until they went up to the arena. Overall, the tour was great, and the history and scale is fascinating, but I’ll take the beauty of the churches and art over Roman ruins all day long. I like the eye candy. Although, the Colosseum is a beauty in the evening. 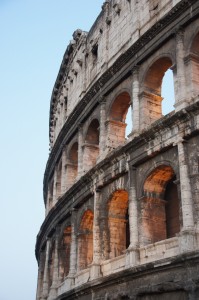 Despite our late night, we decide to wake up early and catch a train to Sperlonga today for a little fun in the sun. It’s a beautiful little beach town about 1 1/2 hours from Rome, and they have things down pat. First, there is very little public beach in Italy. For some people, this is a real problem, as you cannot simply show up, put your towel down, and hang out. Instead, you rent an umbrella with chairs for 20 euro for the day. BUT, they have a changing room, restrooms, and a snack bar. And the shade of the umbrella is a glorious thing.

Also, the beach is where you’ll find the beach vendors at their finest. Want a float? There’s a guy rolling a cart down the beach with a huge selection. Of course we bought one. Need a bikini? There’s a cart of those, too. 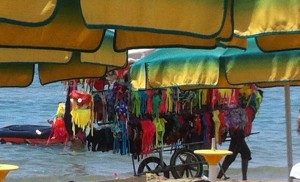 Coverup? Sunglasses? Hats? You’re covered. The only thing lacking was sunscreen, of which I had none that was waterproof. And in true Italian style, but magnified for the beach town, EVERY shop shuts down between 1:00 and 4:00. I learned this in my search for sunscreen at the prime burning hours. Not even the pharmacy was open. I guess they were all on the beach!

Tomorrow is our last day. Despite abundant shopping over the past week or so, tomorrow is the first day of Saldi – the sales in Rome that occur only twice per year, when most stores have sales of 30-50% off. Looks like we might need another piece of luggage.

One thought on “Who are these people?”