I must admit, I was a bit nervous Friday when I received a call at home from the airline. I had debated whether to purchase travel insurance, but was appalled at the cost, and we have never purchased it in the past, so I opted for only helivac insurance. We’ve never bothered purchasing this either, but we (i.e., Jeffrey) have lots of adventure planned for this trip in some pretty remote places, and even something as simple as a kid’s broken arm could require helivac in the middle of the Kalahari Desert. And helivac insurance was only $150 versus $2,000 for full travel insurance!

BUT, I digress. The airline called and said they had a “situation.” It turns out this situation was just an overbooking, and they wanted to put us on a different flight on a different airline which departed one hour later and arrived in Cape Town two hours earlier. So instead of flying through Doha, we flew through London. The layovers are long, regardless of where you connect outside of the US, so we took full advantage of our layover in London. We landed around 11:30am London-time, headed out of the airport and hit a pub for fish & chips, and then spent the afternoon at Hyde Park and Kensington Gardens. It was a beautiful, hot, sunny day in London, so although we were all exhausted, our jet lag was better spent outdoors than cooped up in the airport. 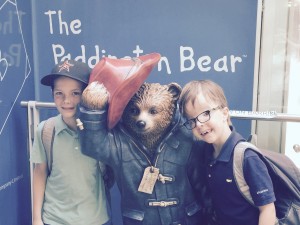 Our flight to Cape Town left at 7:30pm, and we all managed to sleep fairly well. We landed at 8:00am in Cape Town and had a two hour drive to Grootbos, which is a private nature reserve near the southern-most tip of Africa (blue dot on map below). The “child minders” have already taken the boys off our hands for a bit, and this afternoon we will be checking out some 50,000 year old caves located on the property and doing a little horseback riding. Tomorrow, rough seas permitting, is cage diving with the great white sharks! 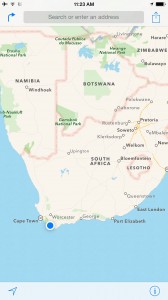 2 thoughts on “Welcome to Africa!”