Between the slow internet and the jam-packed days, writing the blog clearly fell by the wayside, and became a stressful obligation instead of fun. So, I am going retro, not as in paper and pencil, but rather retroactively documenting the past. When I started the blog in Italy 2 years ago, it was a great thing to do once the boys went to bed when I was by myself at 8pm with a glass of wine. Now that they are older and stay up later, and I have Jeffrey to keep me company, I’ve decided it is not my top priority. I’m supposed to be on vacation, not working! BUT, the reason I do it is to document our trips so that I will remember them in the future. Occasionally, I stumble upon the journal that I wrote during my first trip to Europe 22 years ago, and love reading the details of those adventures. Also, I know the kids’ memories of these trips will gradually fade into to night as they grow older, and hope that they will enjoy reading about our travels. So here I am, jet lagged at 5am, going back in time. The following post was started on the trip, but I never completed it, so we’ll start there. I will add the photos, though, since I’m back in the (too) technology dependent good ole U.S. of A…

So, unfortunately, photos on the blog are going to be few and far between from here on out. Not because I don’t have any, but because transferring them to my ipad is just too hard with the slow internet speeds I am getting. And clearly, I am incredibly behind on posting, so I’m going to focus on journaling before I forget what we have done!

Wednesday morning we drove from Grootbos to Cape Town, and after lunch we headed up to Table Mountain, which is the backdrop of Cape Town. It has a flat top, hence its name, and is about 3,500 feet high. Originally, we were going to hike up and take the cable car down, but the mountain was covered in clouds and the hike was expected to take about 2 1/2 hours, so we opted to take the cable car up instead.

Once at the top, we had reservations to abseil (rappel) about 300 feet down the mountain. I made reservations for all four of us, but thought that Carter and I might chicken out. Despite being scared to death, Carter and I did it together, and made it down successfully. Max and Jeffrey went down together afterward, and encountered a little excitement when Max froze on one of the ledges and couldn’t go any farther. Jeffrey was literally trying to “talk him off the ledge” with no success, so Max had to be rescued by one of the guides, who strapped him to his body and rappeled down with Max hanging from him like a sack of potatoes. The whole experience was gut wrenching for me due to my fear of heights, but also exhilarating once my feet were back on solid ground. 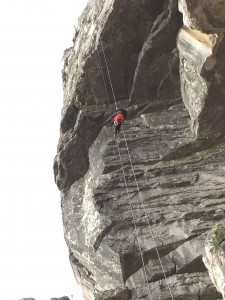 HOWEVER, once we finished, we had to hike about 30 minutes back up the mountain. The only thing more frightening than thinking YOU are going to fall to your death is watching your children and thinking that THEY are going to fall to their deaths. Carter was like a mountain goat, which might have given me comfort, but he was overly confident and made my heart stop a couple of times. Max, on the other hand, was just the opposite, and although he was very cautious, he has difficulty balancing due to the bone structure in his feet. Thankfully, Jeffrey and our guide helped him for the whole hike, which was quite challenging in parts. Thank God we did not hike up originally, and opted for the cable car instead. 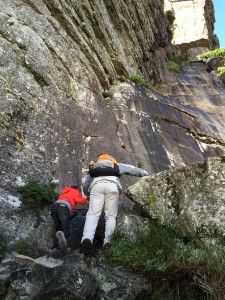 On Thursday, we went to the Kirstenbosch National Botanical Garden on our way to Boulders Beach, which is home to the African Penguin, previously named the Jackass Penguin due to sounding like the bray of a donkey. I never heard that, but I’ll trust ’em. Apparently the name was changed, since they thought it was bad for tourism. A shame, since Carter loved the name. It was so strange seeing penguins on a sandy beach instead of snow. The area has some beautiful boardwalks built so you can view the penguins without disturbing them or their habitat, but you can also go to the beach just down the path and climb over the boulders and look for penguins. I think this was one of the most incredible beaches I have ever seen. The boulders are enormous and smooth, worn down by centuries of water passing over them, and the water is crystal clear. In between the boulders is soft white sand, and you can crawl over and under to find a secluded spot. We did spot a couple roaming penguins, but the scenery, and the playground made by nature were a bigger hit than the penguins themselves.

After lunch, we drove to Cape Point, the most southwestern point of Africa, and the Cape of Good Hope for more breathtaking views, this time from high above the ocean. 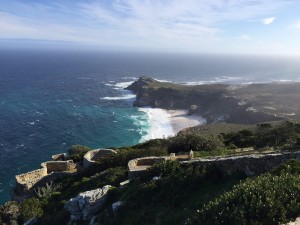 Friday was our last day in Cape Town, and we spent the morning going to Robben Island, where Nelson Mandela was held for 18 of his 27 years in prison. We had a private tour, and were able to go inside Mandela’s 4’x 6′ cell. Our guide was a former political prisoner who also spent more than six years imprisoned on the island. We also met Christo Brand, who was Mandela’s former warden, and has recently published a book called Mandela: My Prisoner, My Friend, which is now on my reading list. It was interesting to learn that the fear of political uprising during the Apartheid era was so strong, the political prisoners were held in the maximum security block, and the common criminals, including murderers, were held in medium security.

In the afternoon, we went to Cheetah Outreach, where we were able to pet a cheetah. Unfortunately, we had very little time interacting with the Cheetah. He seemed a little skittish when we were there, so I’m not sure if the encounter is always that short, or if ours was limited due to his nervousness. While there, we also saw the bat eared fox, the black backed jackal, caracal, and serval. This part was a bit too much like a zoo for my liking, buy it was still nice to see some of these animals up close. The coolest thing that Cheetah Outreach does is breed the Turkish Anatolian Shepherd, which is great at protecting livestock from predators. The majority of the cheetah population in South Africa lives outside protected areas in farmland. As a result, the farmers put out traps to prevent the Cheetahs from preying on their herds. Cheetah Outreach breeds these dogs, which weigh approximately 130 pounds, and give them to farmers so that they don’t have to use traps, thereby helping the cheetah population.