The title of this post is referring to neither the ’80s band, nor Jeffrey’s hair in college, but to the gulls that populate the Tiber River. Our apartment is only a few blocks from the Tiber, and apparently it is the gulls (in addition to the buzzer) who keep interrupting my slumber. “Gulls nest in large, densely packed, noisy colonies.” Yep, that pretty much sums it up. We even saw one at the zoo drinking out of the water fountain today. These are not small birds. 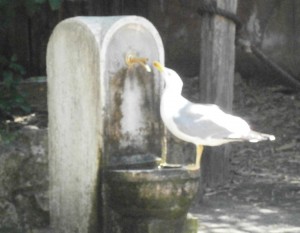 The boys have also learned to drink out of the local water fountains. They are located all over Rome, and are great for refilling our water bottles. If we had to buy water every time the boys were thirsty, we wouldn’t have any money left to eat. The boys definitely prefer the ones with the small holes on top, which they just learned how to use properly yesterday. You stick your finger in the downspout to make the water come out the top hole like a water fountain. I think Max only nailed 3 people at the cafe when he did it the first time.

Our accomplishment of the day was figuring out the bus system. Rome only has 2 metro lines, and our apartment is not near either of them. A third line has been under construction since 2007, but apparently is delayed because they keep running into Roman ruins. In the meantime, they have a great bus system, but it’s a little tricky to navigate. You have to buy your tickets in advance, which are sold at Tabacchi, small shops that also sell tobacco (surprise!), stamps, and phone cards. Everything an Italian needs. The first one didn’t sell any, but we found another that did. I had done some research to find out what bus we needed, but the map that shows which streets the bus follows does not show where the stops are…you have to figure that out on your own. This is not terribly hard when you’re walking down the street, but a bit trickier when you’re on the bus and trying to figure out where to get off. The bus we took is a small electric one that only has about 10 seats plus standing room. The beauty of this bus is that it can navigate the narrow cobblestone streets, but it felt like the bus was in a movie chase scene, and the driver was trying to lose whoever was tailing him. I tried to follow our route on the map as we were driving, but he lost me within about 2 minutes. Thankfully, once we got on a bigger street I was able to figure out where we were again, so we could get off close to where we wanted to be.

Our destination was Villa Borghese and the zoo.  Villa Borghese is a huge park, and we saw just a tiny piece of it on our walk to the zoo.  We’ll probably go back next week to do a bit more exploring, but today we pretty much stuck to the zoo, and I am exhausted from our “easy day.” But the kids had a fun time running around and playing in the rocks. 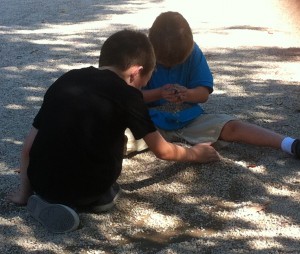 We went back to our favorite gelato place on the way home, and had mango, chocolate, banana, and lavender/peach. All were delicious. Carter says that Jeffrey’s Father’s Day gift should be that we found the best gelato in Rome for him, and we’ll even buy him a cone when he arrives.

BTW, no buzzer this morning, but Max woke us up. Some things never change, no matter where you are. 🙂

3 thoughts on “Flock of Seagulls”