We arranged to get tickets to see the Pope for his last Papal Audience of the summer today. Tickets are free, but you have to email the Bishop’s office a couple of weeks in advance. When we picked up our tickets yesterday, they told us that we should probably arrive at 7:00 am for the 10:30 blessing if we wanted to get good seats. Apparently, they meant that we should arrive at 7:00 am if we wanted to get SEATS. Not that it really would have mattered, because there was no way we were arriving that early with two 8 year olds. I can’t even imagine the number of complaints we would have endured between 7-10, before we got even a glimmer of the Pope. So instead, we arrived around 9:30, and despite our tickets, the seats were gone, and we were in the SRO section of the piazza. Around 10:00, Pope Francis started scooting around in the pope-mobile (BTW, that is an official term. Really.). Jeffrey and I could barely see a thing, due to the sea of people in the piazza. 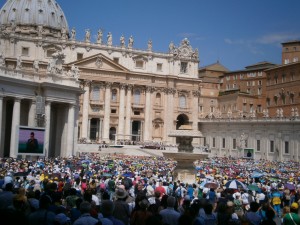 But our in-house reporter, Carter Abel, seated upon Jeffrey’s shoulders, got the shot of the day. In some ways, I’m glad we didn’t have seats. I’ll always remember the shouts of, “I see him! I see him!” and Carter yelling to me to stand still when he was on my shoulders trying to get a photograph. 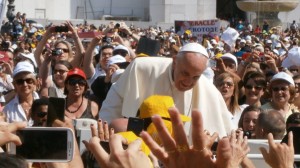 Feeling blessed that we survived the morning with minimal complaining, we decided to skip the official blessing, and head out before the crowds descended. 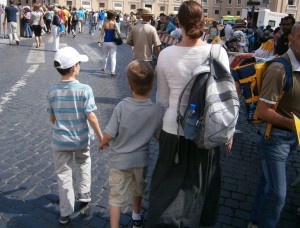 Notwithstanding a few painful and long detours due to poor planning, we finally made it to the Maxxi, one of Rome’s newer contemporary arts museums. After a very long walk, we enjoyed goofing around, lounging in the grass, and rolling down the hill. The building was more interesting than the collection itself, but it was still worth the trip. 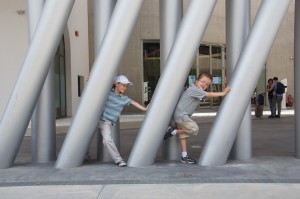 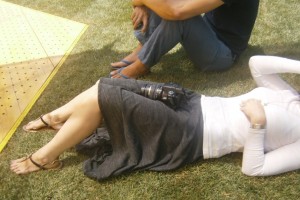 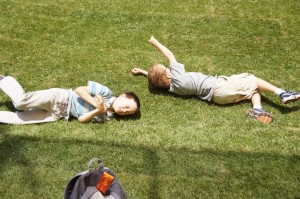 Our trip back was much more straightforward, transportation-wise, and we stopped in Piazza Popolo so the boys could do a little pigeon-chasing (now an official sport in the Abel family), stop in to see some Caravaggio paintings in Santa Maria del Popolo, eat a little gelato, and play in the water outside Ara Pacis (Altar of Peace). Jeffrey and I had been here before, and although I love the juxtaposition of the BC altar inside the modern glass building, we decided the kids were probably not up for it, and opted to let them play outside instead. They loved it, sending leaves down the raging trough of water alongside the steps. 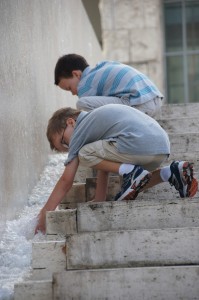 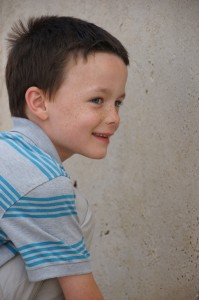 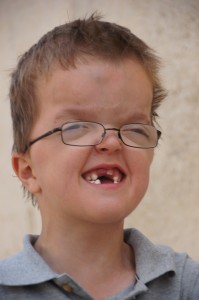 I think they would have stayed for hours, if it had been up to them. But we were determined to get them back to the apartment and have them fed and in bed by 9:00. Not an easy feat in Italy, but we did it. Here’s to well-rested kids tomorrow!