We took the train to Florence Thursday morning, an easy hour and a half, and a world away from Rome. I love Rome, and the chaos of it all, but Florence is a great respite. It’s so much smaller, quieter, and more manageable. The streets smell like leather from all the shops, and we only saw a few cars (all taxis), on our walk home from dinner at 10:00. For me, there’s not enough to see and do there for an extended period of time, but I do love Florence.

After checking into our hotel, we headed to I’che c’e c’e for lunch. We discovered this restaurant 12 years ago with Kim and Scott, and had such great memories of the food, we had to go back. I was surprised, and a little concerned, when we were the only ones there at lunchtime. Were we late? Were we early? Had the food gone downhill since our last visit? But it did not disappoint. Carter and I both had the pasta with cinghiale (wild boar), and it was delicious. The prices were a little higher than I remembered, but the food was great. When we told the waitress that we had been there 12 years ago, Gino, the owner and chef, came out and chatted with us, and told us how to make the cinghiale. 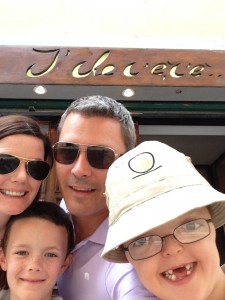 After lunch we roamed the streets, stopped in Museo del Bargello, and checked out the outside of the Duomo. 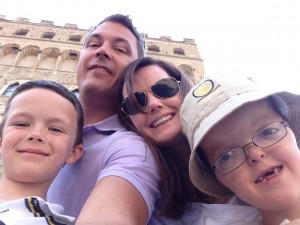 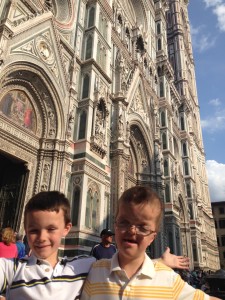 We then went to see David. I am always amazed by the beauty and the scale of this sculpture, and although I have seen it multiple times, I am in awe each time I see it. Unfortunately, they no longer allow you to take pictures inside.

That evening, we had dinner at Francesco Vini, which was recommended by Gino at I’ Che c’e c’e. the cinghiale was not as good as Gino’s, but I had a coniglio (rabbit) pasta that was phenomenal, and a nice break from Roman cuisine.

The next day, we climbed the 463 steps to the top of the Duomo, visited the Leonardo da Vinci museum. The boys loved this. It was small, but had large models of Leonardo’s “machines,” most of which were hands-on. It was nice not having to remind them to not touch anything. 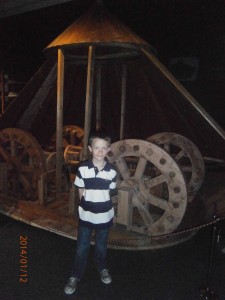 Afterwards, we walked across Ponte Vecchio, and did a little shopping before taking a train back to Rome. Once again, when we were in the cab to our apartment, Carter commented how it was good to be back in Rome. I think I have a convert.

We went to dinner at a restaurant very close to our apartment, called Vino e Camino, that was recommended on both of my foodie blogs. It was in an odd location, and the exterior was quite misleading, but the food was great. I had some of the best mussels of my life and roasted veal shin. It may be worth a repeat!