Today was a great day…double churches, and double gelato. We started out at Sant’Ignazio, the church of illusions, built in the 1600s. The first claim to fame is Andrea Pozzo’s trompe l’oeil ceiling fresco, showing the founder of the Society of Jesus soaring toward paradise. 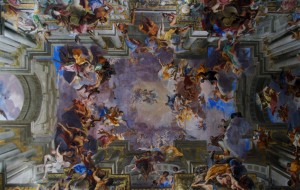 Farther down the nave is Pozzo’s second trompe l’oeil. The Jesuits ran out of cash for the dome, so Pozzo supplied them with a canvas depiction of what it might have looked like. It was destroyed in 1891, and subsequently replaced. It’s a bit hard to capture in photos, but hopefully you get the gist. 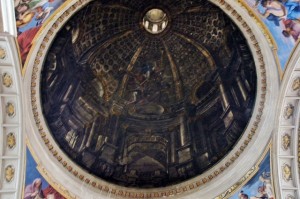 And finally, Jeffrey and the boys. He figures it’s always good to have a little insurance. 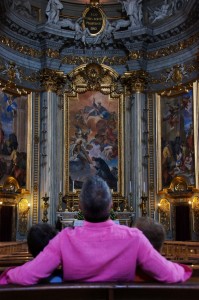 We were near the Pantheon, so we tried to have lunch at Kim and Scott’s favorite restaurant, Vecchia Locanda, but they’re only open for dinner. We went to a so-so place nearby, but the waiter was friendly, and Carter was able to get chicken scallopine. He’s starting to get a little tired of the pasta and pizza, and as much as I hate to admit it, so am I. I’m already dreaming of Chuy’s, Rabelais, and sushi.

After lunch, we tried gelato at Vice. I must say, it was quite good, and nice to try some different flavors: banana w/ crunchy bits, ricotta w/ lemon and orange, the best vanilla of our trip, chocolate, and a very tart lemon.

Then we headed to San Clemente. No photographs are allowed there, but it is often referred to as the lasagne church, due to its layers. The top basilica is from the 12th century, and is full of gold and mosaics. Directly below is a 4th century basilica, with frescoes discovered in the 1800s. And finally, below is both a 2nd or 3rd century Mithraic temple and a 1st century public area. The 1st century structure, more than 50 feet underground, even contains flowing water that is thought to come from a lost spring or an aqueduct that once supplied the 1st century houses.

After taking the bus back to our neighborhood, we dropped our backpack at the apartment, and took a stroll near Piazza Navona for a little shopping, watching the street artists in the piazza, and a second (!) gelato at Teatro. They had a new flavor on the menu today- apricot. Yum. Yum. Extra yum.

2 thoughts on “Make Mine a Double!”