After yesterday’s restaurant disappointment, I went back to my Rome blogs written by expats to make sure I did not make the same mistake again. With a new food app (Eat Rome) to supplement my original food app (Parla’s Rome), and a few days of rest, I was ready to go today. Carter helped me make sure we didn’t forget anything in the backpack. 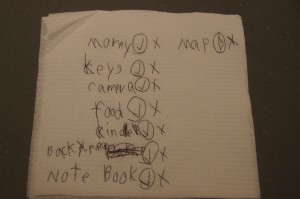 We took the bus over to “Monti,” an area to which we had not yet ventured. The bus was an adventure, as it is the same one that goes to the train station and is usually packed. In fact, the first bus was so crowded, there was no room to get on. We waited for a second bus, which was much better, but still standing room only. And HOT. And stinky. When we got off, Carter said he thought he was going to have to hold his nose the whole way. I guess that’s the downside of being at armpit level. The upside is that I’ll hear fewer requests to take the bus!

I was really looking forward to a lunch at L’Asino d’Oro (which translates into the Ass of Gold), but unfortunately it is closed on Sundays, so we had lunch at a little wine bar called Tre Scalini (also on my food app!). It was quite good, great atmosphere, and very reasonably priced. We’ll definitely need to go back to Monti to try the Ass of Gold and do a little shopping, as the area is filled with artisan shops. We had planned to do some of that today, but it was so hot, and many of the stores aren’t open on Sunday.

In my research last night, I discovered a museum that I had never been to, Palazzo Valentini, that was also recommended by a mom with a 12 year old and an 8 year old. Here you can see archaeological remains of ancient Roman houses underneath the Palazzo, which was built in 1585. The museum is extremely well done, and Carter says it’s the best thing he’s seen yet. The museum takes you through a guided tour, and uses multimedia to recreate the ancient houses through videos, graphics, and light projections. The museum has glass floors for viewing all of the remains, and uses projections to show you what it may have once looked like in its original state, filling in the missing parts of mosaic floor and showing how the walls may have been painted. At the end of the tour, they have a short film explaining the story depicted on Trajan’s Column, Roman emperor Trajan’s victory in the Dacian wars. Then we were able to get a close-up view of Trajan’s Column, from a small gate in the bottom of the Palazzo. Pretty cool, indeed.

We decided to walk home and forego the hot, stinky bus, and tried Gelateria Corona. I had lemon basil, which was good but a little icy. Max had mango and vanilla, which was delicious, and Carter had the classic caffe and dark chocolate. The beauty of gelato is that you can get 2-3 flavors on one cone/cup. I usually stick with just one if I’m getting one with herbs, because I can never decide what to pair it with.

Not many photos today, but I did get one of the boys drinking out of one of the local fountains. I liked this one because it had multiple spouts. You can see how they’ve perfected the diversion of water into the top hole. 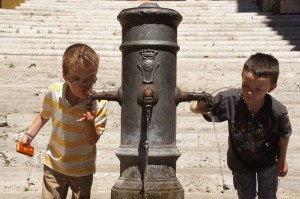 One thought on “Ancient Ruins and Trajan’s Column”